Jiehkkevarri is the highest peak in the Lyngen alps and Troms county. It also has the second highest prominence among the Norwegian mountains. Skiing is possible on all sides but the striking 1100 meter West couloir counts as one of the longest and continuous challenging runs.

Starting from Tromsø in the morning with Ole, Marianne and Johanna I knew that this probably was the last chance I had this season to ski this couloir. 18th of May, still lot’s of snow in the mountains and perfect weather forecast. 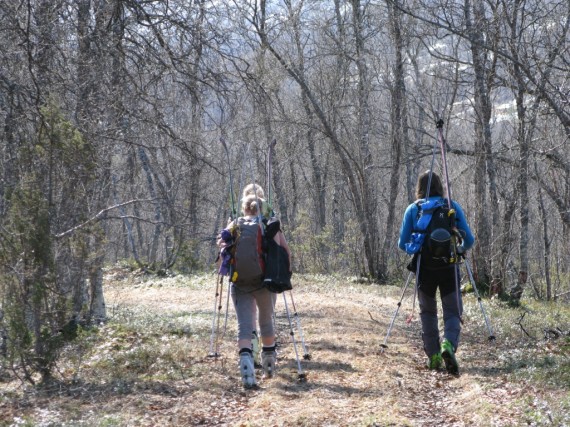 On the way up and over Holmbukttind 1666m we looked straight in to the coulouir and it looked really steep, like it always does when looking straight into something. Since we didn’t know if someone had skied this run before it was really exciting. On the top of Jiehkkevarri it was clear that Ole and Marianne would like to go back the same way butI wanted at least to have a look over and into the couloir. From the summit we skied a long and easy slope until the natural entrance shows just at the first big rock spur. The start can probably be a bit blocked by cornices at times but for us, this late in the season, there was no problem side stepping and skiing in.

Standing at the end of the first 20 meters, knowing that this was the last point of return it took us a few minutes get psyched enough to get on with it. It started to get late and the warmth made us concerned about getting things in our heads. There was clearly no safe spots during the whole 1100m run which made this thing even more challenging. On our right there was a 50m high and 1000 m long rockwall and to our left the North West face.

After the first few turns with easy manageable slough we started to enjoy our ride for real. To be in such a position is just out of this world and making turns without any sense of getting closer to the valley floor. The skiing was magic and well down in the valley of Fugldalen we had to put our skis on our backpacks to do the last walking out, turning around every now and then to make sure that we actually skied the damn thing.